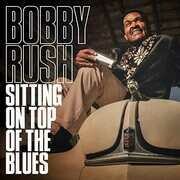 Bobby Rush - Sitting On Top OF The Blues

SKU VINBOBR1SIT
$12.98
In stock
1
Product Details
Sitting on Top of the Blues is the 26th studio album and 75th career release by Grammy winning and Blues Hall of Famer Bobby Rush. This album will be the follow-up to his first Grammy Award winning album Porcupine Meat and is another set of songs written by Bobby Rush that tell stories that are funny, serious, and all around entertaining. The album incorporates down home Chicago style blues, Southern soul, and one acoustic blues track. This album again illustrates Bobby Rush as a one-of-a-kind storyteller who's veins run deep with the blues.
Save this product for later