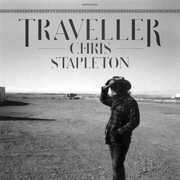 SKU VINCRSSTA1TRA
$24.98
In stock
1
Product Details
Traveller is the highly anticipated Mercury Records Nashville solo debut album from rising superstar Chris Stapleton. Already a world-renowned songwriter, Stapleton has enjoyed five #1 hits including the five-week No. 1 "Never Wanted Nothing More" recorded by Kenny Chesney, George Strait's "Love's Gonna Make it Alright" and Luke Bryan's "Drink A Beer." Recorded at Nashville's historic RCA Studio A (with additional production at The Castle and Blackbird Studio), Traveller was produced by Dave Cobb (Sturgill Simpson, Jason Isbell) and recorded by Vance Powell (Jack White). In addition to renditions of Dean Dillon and Linda Hargrove's "Tennessee Whiskey" and Don Sampson's "Was It 26," the album features twelve original songs, including fan-favorite "Sometimes I Cry."
Save this product for later
Display prices in: USD