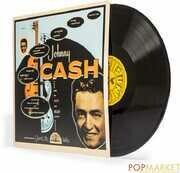 Johnny Cash - With HIs Hot and Blue Guitar

SKU VINJONCAS1HOT
$21.98
Out of stock
1
Product Details
Reissue of 1957 album pressed onto 180 gram picture disc LP. ORG MUSIC 2014. Johnny Cash with His Hot and Blue Guitar is the debut album of country singer Johnny Cash. Released in 1957, it was the first LP ever issued on Sam Phillips' Sun Records label. Currently out of print, the album is being remastered and reissued on an exclusive blue color vinyl for Record Store Day. This limited edition pressing of 3,000 units will be numbered with a foil stamp on each jacket.
Save this product for later